The month of July is being spent with the Ministers preaching about all the success the church has reaped. It will cite all kinds of examples because it will be “PROOF” that the current leader, the Beloved EVM is guided by God.

But if you carefully examine everything it shows a very different picture.

What we often hear are about Numbers:

First of all, the number of countries reached is a deceiving one. It merely states that there are church members in that country. It does not mean that the gospel has been preached to the people of that nation and that citizens of that country have joined our church. Don’t understand what I am saying? Carefully examine photos of brethren worldwide. What do you notice? FILIPINOS. Those are church members who came from the Philippines probably to find work in that particular country. So what happens? Lo and behold the church is now in 160 plus countries. In some cases there are actually only 3 to 5 church members in that entire nation. So can one honestly say that it is part of EVM’s success?

To avoid any EVM fanatics jumping in and arguing, let’s simply ask, in those 160 plus countries, let’s be honest, how many in Israel are Israeli church members? In Russia? How many Russian brethren? How many Swedes? Get my point? They are still mostly FILIPINOS. Don’t let the numbers being thrown at you cloud your brain.

Secondly I don’t mean to belittle the number because it is good that the Church is in those countries but that’s not all are EVMs accomplishments either. Many of those countries were reached by members long ago. Places like United States, Canada, United Kingdom, France, Italy, Germany, Guam, Australia, Hong Kong and Japan were all during the time of Bro. Eraño Manalo’s time. Why did I mention those countries? Because those are where the majority of brethren are outside the Philippines.

So what is the difference now? Why am I bringing this up now and not during Brother Eraño Manalo’s time? Well, for starters, let us ask, when we hear of MORE countries reached, which are they? And exactly how many members are there? 3? 7? 24? Can we even count them as “congregations“?

How is it different now? There used to be a standard number of people before they could be counted as a “congregation” or a “committee prayer group” or an “extension”. Not because 4 people met in one country that it is already a local congregation or a district. Let’s not fool ourselves. Moreover let’s not fool others.

I know the EVM fanatics will jump all over my statement there and will say that even Bro. Eraño mentioned that the church has reached so many countries, that’s true but he never boasted about it like it was some kind of PROOF that he was appointed by God. It was never a measure of his accomplishments, but merely a statement of truth – rarely thrown in our face. Nowadays every little event is touted as some fulfillment of God’s prophecy to EVM.

Now let’s talk about “accomplishments“. In the next few months we will be hearing more and more about the great accomplishments of our Beloved leader proving once again that he is “truly appointed by God” (especially this is his 10th year as Administrator.  We will be reminded of this many things built, that many accomplished, how many this and how many that was done under the leadership of the Beloved EVM.

But let’s be clear on this, when it comes to God, BIG NUMBERS don’t mean a thing and it does not mean that it is God’s work. Let’s read 3 specific examples for clarity:

Judges 6:14-16 – “The Lord turned to him and said, “Go in the strength you have and save Israel out of Midian’s hand. Am I not sending you?”

“Pardon me, my lord,” Gideon replied, “but how can I save Israel? My clan is the weakest in Manasseh, and I am the least in my family.”

The Lord answered, “I will be with you, and you will strike down all the Midianites, leaving none alive.”

Saul answered, “But am I not a Benjamite, from the smallest tribe of Israel, and is not my clan the least of all the clans of the tribe of Benjamin? Why do you say such a thing to me?

Deuteronomy 7:1, 7 – When the Lord your God brings you into the land you are entering to possess and drives out before you many nations—the Hittites, Girgashites, Amorites, Canaanites, Perizzites, Hivites and Jebusites,seven nations larger and stronger than you—

The Lord did not set his affection on you and choose you because you were more numerous than other peoples, for you were the fewest of all peoples. 7:7

What can we notice from these three separate passages? Gideon and Saul were appointed by God. Israel was chosen by God. Both men said that they were the least or the weakest or the smallest. Israel was certainly not the largest nor the most powerful nation. And yet, that’s what God wanted. Big numbers don’t mean a thing to God. On the contrary, He prefers the small and weak. Why? Apostle Paul wrote this:

God intentionally chooses the weak to put to shame the strong. What is another reason?

The Lord said to Gideon, “You have too many men. I cannot deliver Midian into their hands, or Israel would boast against me, ‘My own strength has saved me.’ judges 7:2,7

The Lord said to Gideon, “With the three hundred men that lapped I will save you and give the Midianites into your hands. Let all the others go home.”

What can we notice? God never goes for the big numbers and He states clearly why. Because “people would boast of themselves”. or as it is in our time you have other people boasting for you.

God always wants the underdog so that that it is never about them.

So why do we now boast of World record breaking feats? When we are able to form the LARGEST HUMAN SENTENCE in the world, does it really show God’s power? The largest domed arena? Was that a miracle that formed from nothing? No of course not. Because others can easily top that. But aren’t those things also success? Yes, you can say that. But we have to distinguish between the TRUE WORK of GOD and what is simply MANUFACTURED SUCCESS. If it’s something that any man can replicate then where is the wonder in that? For example, the Philippine Arena. One of the big boast of the current Church Administration is that he was able to build this enormous building. Record breaking even. But can this also be replicated? It has already begun. 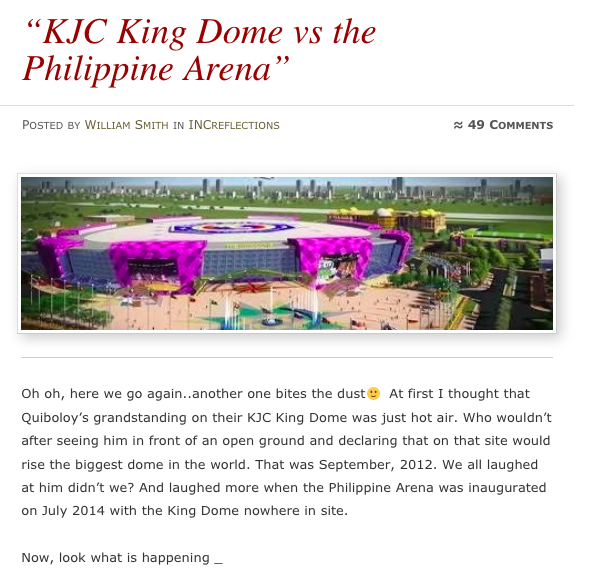 The point here is not whether we can accomplish something with great numbers. Like God told Gideon, “you have too many men. They will just boast against me”. So like now when the Administration says we are able to missionise millions, is that really that “amazing”? Not really. Because 1. If there are over 2 million members, that pretty much comes out to less than one guest per member. 2. Even if millions are missionised, it’s no guarantee that they will join the church. 3. Why boast about millions being missionised when God said that the number of people that are deceived as “many as the sand of the sea?”

“And when the thousand years are expired, Satan shall be loosed out of his prison,  And shall go out to deceive the nations which are in the four quarters of the earth, Gog, and Magog, to gather them together to battle: the number of whom is as the sand of the sea.” Revelations 20:7-8

And finally, whilst we are in the book of Revelations, should we really boast that the Church is now in 160 plus countries? Should we be proud that the Church is all over the world? Have we forgotten the old doctrines that we were taught? What is one of the prophecies in Revelations that the Messenger and Bro. Eraño taught us? The description of the FALSE CHURCH.

“Then one of the seven angels who had the seven bowls came and talked with me, saying to me, “Come, I will show you the judgment of the great harlot who sits on many waters” Revelations 17:1

“Then the angel said to me, “You saw the waters where the prostitute sits. These waters are the many peoples, the different races, nations, and languages in the world.”

So the great harlot or prostitute or the false church described in Revelations is EVERYWHERE!; many peoples, different races, nations and languages. So should we really boast about being everywhere?

So let me summarise all these points;

So tell me again, why would we brag about numbers?

21 thoughts on “Bragging about Numbers”